Chemical sensors are used for many purposes, such as environmental hazard screening, explosives detection, product characterization, and medical testing. The electronic properties of SWNTs can change significantly when gases and bio-molecules are adsorbed to their surface. These changes can be detected in resistor, transistor, or capacitor devices. 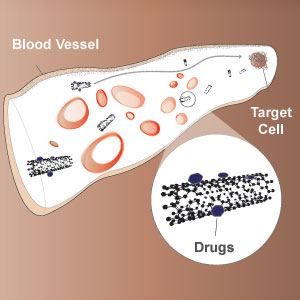 Semiconducting CNTs may prove useful for targeted drug delivery (estimated to become an $80.2B industry by 2014).

Anti-cancer drugs may be delivered more efficaciously and with fewer systemic side-effects using a “smart” nanotechnology platform than by conventional methods. Small-diameter semiconducting SWNTs represent one such promising platform, due to their strong absorbance in the so-called therapeutic infrared window (between 700-1100 nm, depending on body tissue type).

Our IsoNanotubes-S are one of a handful of materials in existence which satisfy these property requirements.

Large-diameter semiconducting SWNTs are good absorbers and emitters of light in the infrared. Moreover, high-purity SWNT thin films have been demonstrated to be photoconductive and photoluminescent under NIR illumination.

IR sensors/emitters are useful for a number of military and civilian applications.